Ever wonder how today’s hard drives are manufactured?  I think it’s amazing that we can buy hard drives that store more than a terabyte for about a hundred dollars. When you watch this video, you’ll see how this miracle in manufacture is done.

All operations are performed in a clean room environment, because clearances and tolerances are measured in fractions of microns. (A micron is about 0.00004 inch. A human hair ranges from about 20 to 150 microns in diameter.)  In operation, the read/write head of a modern hard drive flies a few nanometers above the platter surface.  A fingerprint on a platter could cause a head crash. 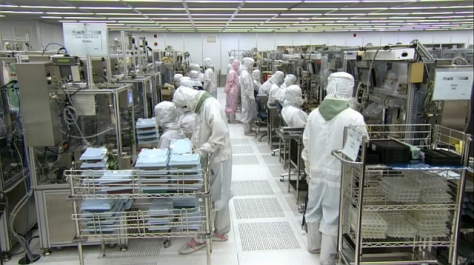 I recently replaced the hard drive in a three-year-old mini-tower PC that had spent its life on an office floor. It was a routine job with the expected dirt and dust inside the case. No vacuum was available, so I used the shop’s compressed air and blow gun to blow out the dirt, then reassembled everything. When I started the PC, it howled a loud screeching/ticking noise. I opened the case, removed power from the hard drive, powered on the PC, and listened with a stethoscope. The noise was coming from the power supply — probably its fan.

I removed the power supply, disassembled it, and discovered that the power supply fan’s 12 Volt DC supply wires — maybe 28 gauge, were rubbing against the spinning fan blades. A jet of compressed air through the power supply case perforations must have nudged the wires into the fan blades. I dressed the wires so that they were a quarter-inch from the blades, reassembled everything, and the PC worked quietly. Time lost to troubleshoot and repair this dumb problem which I had caused: 1 to 1.5 hours.

The supply of hard drives has been dramatically affected by Thailand’s recent floods.

Flooding in Bangkok, Thailand-October 24, 2011: This is a satellite image showing flooding near Bangkok, Thailand. Locals are parking their vehicles loaded with belongings on overpasses on highway ramps to protect them from being affected by flood waters. This stretch of highway is the Sapan Nonthaburi Ban Bua Thong Highway # 3215 where it intersects with the Soi Chai Uea Highway #307.

The recent flooding in Thailand has caused dramatic shortages in the hard drive market. Many hard drive manufacturers have major manufacturing plants in Thailand. Western Digital and Seagate facilities are especially hard-hit. The shortages have resulted in big jumps in hard drive prices. Hard drive prices have risen 20 to 40 percent recently. I noticed that one Western Digital 1.5 TB drive jumped from about $120 retail to $180 retail in just one week.

This is not a good time to upgrade or replace your hard drives. Wait a few months for the pipeline to fill up with new drives, and we’ll see hard drive prices fall again.

Thailand is not the only country that manufactures hard drives. Malaysia, Singapore, and China are major producers as well.

Industry observers predict that hard drive shortages will persist into 2012 and cause the prices of finished systems to rise. It’s expected that as the floods subside and Thai hard drive production resumes, prices will fall and stabilize roughly where they were a month ago. When will this happen? Maybe 2nd quarter, 2012.

Check disk’s health while defragmenting it.

I just noticed that Piriform’s Defraggler program now includes a page that displays the disk’s SMART (Self-Monitoring, Analysis, and Reporting Technology) data. This strikes me as a great idea: when I’m thinking about defragmenting a disk, I want to see how many hours the disk has run, and if it shows signs of imminent failure.

I’m not sure exactly when Piriform added the SMART data display to Defraggler. Version 2.07.346, which I just downloaded, has it. I don’t recall seeing the SMART page in previous versions. Way to go, Piriform!

Google published failure statistics on 100,000 disks, but it’s impossible to predict exactly when your disk will fail.

I recently had a new client express surprise when I mentioned that his computers’ hard drives will fail, sooner or later.

Google studied 100,000 of their hard drives, and in 2007, in Failure Trends in a Large Disk Drive Population, they published their failure statistics and conclusions. Google uses low-cost drives just like the kind that are in our desktop PCs. (What exactly is inside a Google data center?)

StorageMojo, in Google’s Disk Failure Experience by Robin Harris, did a great job of summarizing the results. The article points out that when a disk’s SMART reports

the disk is failing and should be replaced before it dies completely.

For most users, the most relevant conclusion is that a disk is more likely to fail as its power-on time reaches 3 years and more. I usually recommend replacing working disks when they have 40,000 hours or more of power-on time. (There are 8760 hours in one year.) As usual, your mileage may vary.

Like Loading...
With HD Tune, you can monitor disk SMART data within Windows.
Yesterday, I wrote about the value of disk SMART data. I mentioned that I prefer to monitor SMART data from within the single-tasking DOS operating system. A Windows program, HD Tune, displays disk SMART data and is available as freeware when installed for personal (not business) use. Give it a try!

A few months ago, I was asked to repair a mission-critical desktop computer at an automobile repair shop. Symptom? Windows froze midway during system startup. The problem was caused by a disk sector failure. Once the bad sector was mapped out, the system booted fine, but I was concerned about how much life remained in the disk.Most modern disk drives include a clever system called SMART (Self-Monitoring, Analysis, and Reporting Technology): the disk records total runtime hours, number of start/stop cycles, number of read and write errors, etc. We examined this disk’s SMART data; it had over 50,000 hours on it. It was nearing its end of life. In June, the owner purchased a new disk, and we made a bit by bit copy of the entire old disk unto the new disk, which we placed on the shelf.

Last week, the system again failed to boot. The BIOS displayed a message similar to the one in the picture: Immediately back-up your data and replace your hard drive.. I examined the disk’s surface and discovered that it had seriously degraded since I last looked at it a few months before. Sadly, when this message displays, it may be too late!

We replaced the failed disk with the new one (which we had cloned from the old disk back in June), and, voilà!, it booted up and ran fine.

Last year, I encountered a similar scenario. In that case, a desktop computer in a condo management office’s accounting department had failed. Same reason: bad disk sectors. In that case, SMART said that the disk had 69,000 hours on it — clearly it was on its last legs. The manager authorized a pre-emptive disk replacement.

These two managers were smart: they knew that nothing — least of all, hard drives — lasts forever, and used proactive management to avoid catastrophe.

Every complex system has a mean time before failure — MTBF. The aircraft industry records every hour of runtime on its critical systems and requires that they be replaced before they’re likely to fail. I’ve not seen a Hobbs hour meter on a personal computer, but it would make sense.

How to display SMART data

SMART data resides at a very low level. Windows, as far as I know, has no SMART system calls that can be used by Windows programs. I like to boot a questionable system from DOS, using the Ultimate Boot CD. This CD contains a demo version of Astra, which displays many screens full of system information, including all SMART data. There’s at least one Windows-based SMART data display program, published by ntfs.com, but the full version costs money, and I’m not convinced that digging down beneath Windows directly into disk hardware is prudent while Windows is running.

There are at least two freeware programs for Windows that display SMART drive data. One is Driveinfo, and the other is DiskSmartView (see screenshot).

Whoops! Please ignore the sensitive anti-missile missile data that we forgot to wipe from our discarded PC’s hard drive.

I like to use a 3/8 inch diameter drill to drill a few holes through disks before discarding them. Here’s a simple discussion of alternatives: http://www.popularmechanics.com/technology/how_to/4212242.html

Like Loading...
Today I helped an owner of a new PC transfer his files from a pair of old hard drives (removed from his failed old PC, which ran Windows XP) to his new PC, which was running Microsoft® Windows Vista, Home Premium edition.  Because his new PC lacked an IDE drive controller (its hard drive had a SATA interface), we couldn’t simply hang the old IDE drives off the new PC’s IDE bus. After a couple of false starts, we completed the job by using a USB to IDE adapter.

It looked like the hard drive was toast, though it would spin up. When I closely examined the hard drive’s first few sectors back in the shop, I could see that one of the sectors in the MBR (master boot record) was damaged. Luckily, I could map out the bad sector and scan the remainder of the disk surface, which required days to complete. I found six damaged sectors, which I flagged as unusable. Luckily, of the six, only three were unreadable and contained no critical data. The drive was only a year old and out of warranty. Drives usually last much longer.

Is the quality of new hard drives declining, or is this just a freak?