I just listened to an excellent interview with Walt Mossberg, who since 1991 wrote a weekly computer industry column for the Wall Street Journal. Walt’s now retired. Leo Laporte, an industry podcaster, coaxes some great stories from Mr. Mossberg.

Walt’s perspective was always that of a user — not a tech freak. Most industry reporters are techies who don’t appreciate that most of us don’t care about the inner workings and secret mechanisms of computers.

Walt speaks a bit about his long relationships with both Steve Jobs and Bill Gates. (Walt sat in the passenger seat as Gates, frustrated by traffic, drove his Lexus for miles on the road’s shoulder.) 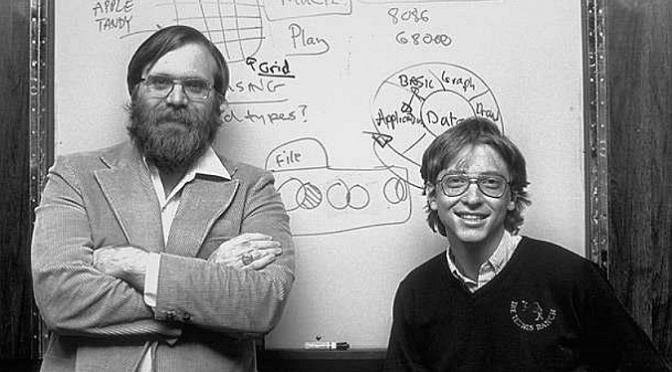 Bill Gates his own self walks us down memory lane in the first of a series of 26 short YouTube videos that document the history of Microsoft.

It’s fun to watch the older clips, but I soon tired of the undiluted public relations effort. It presents a one-sided view of Microsoft.

No, I’m not referring to the Bill Murray movie. I’m referring to Microsoft Bob, the “friendly interface” that Microsoft introduced c 1995. It flopped. Its product manager? Melinda French, who subsequently married Chairman Bill.

There’s no mention of Microsoft’s dark side, which began from day one. Microsoft BASIC, copyrighted by Microsoft, was a port of Dartmouth BASIC, whose source code was in the public domain. MS-DOS 1.0 was not written by Microsoft. MS-DOS 4.0 was a disaster. Windows Millennium was worse.

The strongarm sales tactics of Gates and Steve Ballmer (Microsoft’s Ringo Starr) aren’t mentioned, nor is the conspiracy by Gates and Ballmer to dilute the shares of co-founder Paul Allen when he fell seriously ill.

Watch the documentary, but remember that it’s essentially a long-play Microsoft advertisement. 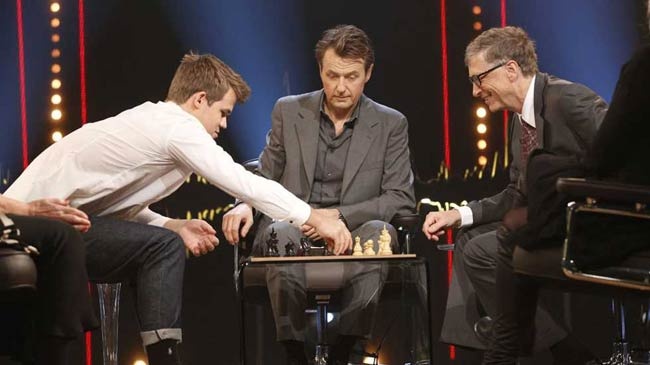 You don’t often see the word loses after Bill Gates’ name. If you read Hard Drive: Bill Gates and the Making of the Microsoft Empire or know anything about Bill Gates, you’re aware that he hates to lose. He grew up playing family board games in full combat mode. Whether the game was Scrabble or Monopoly, everyone in the Gates family played to win and took no prisoners.

That’s why it’s fun to watch a brief YouTube video of last month’s speed chess game between Bill and 23-year old world chess champion Magnus Carlsen. Within 90 seconds, Carlsen checkmated Gates in nine moves. I give credit to Bill for exhibiting good humor in the face of crushing defeat. Chess Magazine published a detailed report of the game. Here’s a video analysis.

Did you watch the recent CBS-TV 60 Minutes interview with Bill Gates? He’s written about it in an article titled Talking to 60 Minutes on his blog, thegatesnotes.com. It adds fascinating information about his friendship / rivalry with Steve Jobs.

Steve Ballmer is no Bill Gates.

Steve Ballmer, who’s replaced Mr. Gates as Microsoft CEO, is, by contrast, a sales manager: essentially, Steve is a cheerleader. He isn’t a programmer, and reportedly lacks Mr. Gates’ vision. He may be as aggressive as Mr. Gates.

Microsoft has been stumbling for years: the Windows Vista fiasco, initial inattention to Windows security, loss of the Search market to Google, loss of embedded systems markets to open-source operating systems, are just some mis-steps. Industry pundits, including investors, have been calling for Ballmer’s ouster. Last week, I heard Kim Komando add to the chorus of “Ballmer must go!”

I suggest that Microsoft may be better served not by replacing Mr. Ballmer, but by offloading his technical and visionary responsibilities to two other people: one with programmer/technical skills and another person with vision. Allow Steve to do what he does best: sell product.

A triumvirate would complicate Microsoft’s corporate structure, but where will Microsoft find another Bill Gates? 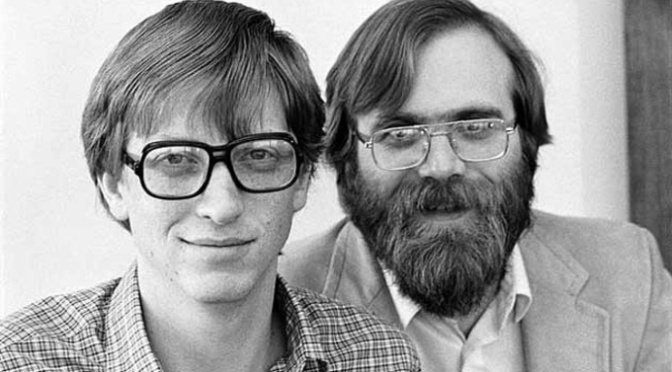 I’m beginning to feel like a shill for The Charlie Rose Show. A few nights ago, he interviewed Paul Allen, the guy who partnered with Bill Gates to form Microsoft. Paul and Bill were high school buddies whose first venture was Traf-O-Data: a vehicular traffic counting system built upon the Intel 8008 microprocessor.

I’ve always been impressed with Mr. Allen’s programming skills. In order to write the first BASIC interpreter for the then-new Intel 8080 microprocessor (which neither Bill nor Paul could afford), Paul first wrote an 8080 emulator on a Digital Equipment PDP-10 “mainframe” (in PDP-10 assembler) to which they had access. Meanwhile, Bill began writing the BASIC interpreter in 8080 assembler on a yellow notepad. Bill’s friend, Monte Davidoff, wrote the floating point arithmetic routines. Once Paul had the 8080 emulator working on the PDP-10, Bill could start writing and debugging 8080 assembler code to create the 8080 BASIC interpreter.

Using the corporate name Micro-soft, they licensed the BASIC interpreter to MITS (Micro Instrumentation and Telemetry Systems) in Albuquerque, New Mexico. MITS had just begun producing the Altair 8800 microcomputer as a kit. It used the Intel 8080 CPU and MITS needed software to drive Altair sales. Bill and Paul guessed that they had about a month to create a BASIC interpreter before somebody else beat them to the punch.

It’s the stuff of legends: in 1975 Paul boarded a plane to MITS’ headquarters (located in a shopping center) with a copy (on paper tape, I think) of Paul and Bill’s untested BASIC interpreter, which they’d run on the PDP-10 only. They had never run it on an actual 8080. The demo of their BASIC on an Altair 8800 at MITS was the first time they’d ever run it on an honest-to-goodness 8080!

Why did he leave Microsoft?

Paul Allen left Microsoft in 1983 following a diagnosis of Hodgkin’s disease. After listening to this interview, I surmise that a secondary cause of his departure was friction with Steve Ballmer, who had lived in Bill Gates’ dorm while they were at Harvard, and was hired by Bill to sell Microsoft products. (Update Aug 2013: Apparently Paul overheard Bill and Steve scheming to dilute the value of Paul’s Microsoft shares.) Mr. Allen confirms reports that Bill Gates was a sensational programmer. Though their relationship has cooled, Paul clearly respects Bill’s brilliance.

Paul has written a new book, Idea Man: A Memoir by the Cofounder of Microsoft. Sounds worthwhile.

A conversation with William Gates Sr. and Bill Gates Jr.

CBS-TV ran a video segment about Bill Gates’ father today (Fathers’ Day) on their Sunday Morning show. I enjoyed seeing the house where Chairman Bill was raised, including the bedroom window through which he escaped at night to debug a computer with friend Paul Allen at a local company. His sisters share his looks and humor.

Read about Bill Gates’ origins, in a fascinating 1997 Time Magazine article by Walter Isaacson, In Search Of The Real Bill Gates. Here’s an excerpt:

In ninth grade,” Gates recalls over dinner one night, “I came up with a new form of rebellion. I hadn’t been getting good grades, but I decided to get all A’s without taking a book home. I didn’t go to math class, because I knew enough and had read ahead, and I placed within the top 10 people in the nation on an aptitude exam. That established my independence and taught me I didn’t need to rebel anymore.”

By 10th grade he was teaching computers and writing a program that handled class scheduling, which had a secret function that placed him in classes with the right girls.

His best friend was Kent Evans, son of a Unitarian minister. “We read FORTUNE together; we were going to conquer the world,” says Gates. “I still remember his phone number.” Together with Paul Allen, they formed the official-sounding Lakeside Programmers Group and got a job writing a payroll system for a local firm. A furious argument, the first of many, ensued when Allen tried to take over the work himself. But he soon realized he needed the tireless Gates back to do the coding. “O.K., but I’m in charge,” Gates told him, “and I’ll get used to being in charge, and it’ll be hard to deal with me from now on unless I’m in charge.” He was right.

This Time article is a really well-done insight into what makes Bill Gates tick. I’ve read biographies of Mr. Gates and thought that I knew most of the details of Bill Gates’ history. I was wrong: this article revealed still more details.

Charlie Rose, who has a first-class interview program on US public television, sat at a table with the Bill Gates whom we know (chairman and founder of Microsoft), as well as his father, William Gates, Sr., and to some degree, learned what makes them tick. I was fascinated with the hour-long interview, which took place in April. There’s deep love and admiration between father and son. It’s clear that Mary Gates played a major role in the lives of both men; I’d like to have heard her in this conversation, but she’s deceased. Father credits son with these defining qualities:

Last night I enjoyed listening to Charlie Rose’s hour-long interview (aired by PBS’ WLRN-TV Miami at midnight) with Bill Gates (founder and chairman of Microsoft). The first thirty minutes concerns Microsoft and Bill’s vision for the future of info tech; the rest concerns the work of the Gates Foundation. View it here: http://www.charlierose.com/view/interview/9875
Visit my website: russbellew.com

Bill Gates officially retired from Microsoft on June 30 (Wired Magazine article). If you’re interested in the history of computers (I am) and Bill Gates’ place in that history, here‘s a fascinating roundtable discussion by longtime PC pundits. Hosts: Leo Laporte, John Dvorak, Jerry Pournelle, and Bill Machrone. It’s in MP3 audio form. (I love to listen to such audio clips as I work.) If you’ve been involved in PCs for more than a few years, you’ll recognize these guys’ names as decades-long insiders. Compare Bill’s look now with Microsoft’s corporate photo from 1978.
Visit my website: russbellew.com