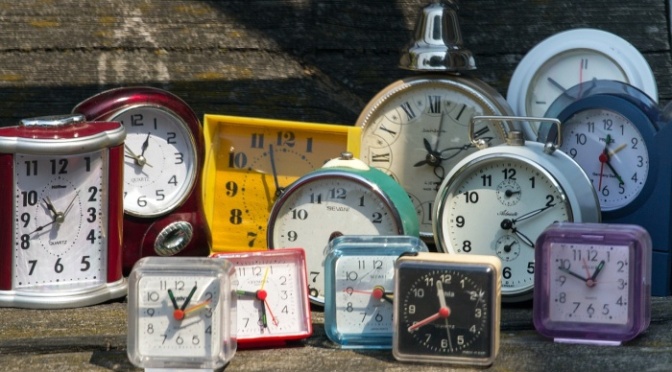 The True Nature of Time video documentary on YouTube, with physicist Michio Kaku:

Another excellent production by BBC. Michio Kaku explains complex ideas in easy to understand terms. (In my opinion, the best video presentation of time and Albert Einstein’s theores of relativity was produced in 1997 by the BBC.)

Do you think that Einstein’s theories of relativity don’t apply to our everyday world? Think again. Our GPS (Global Positioning System) wouldn’t work if it didn’t include compensation for the effects of both Einstein’s Special and General Theories of Relativity. If GPS assumed classical Newtonian models of time and space, our GPS receivers would accumulate about six miles of inaccuracy each day. Einstein’s Relativity and Everyday Life 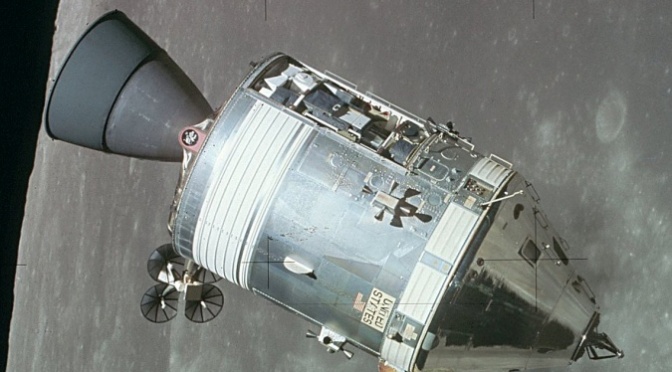 I watched a 1969 film on YouTube about the inner workings of the Apollo Guidance Computer that helped put a man on the moon. The navigation details are fascinating. I had no idea that the astronauts used a sextant to shoot bearings to stars! 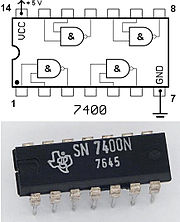 The film shows logic gates that are packaged in TO cases. (TO cases are small diameter metal cans used to house transistors.) By 1967 these would have been obsolete. In 1967 we were already developing products with readily-available quad NAND gates (using TTL — transistor-transistor logic). These 7400-series parts were packaged in 14-pin plastic DIPs (Dual In-line Packages). The higher spec’d 5400 series were packaged in ceramic DIPs. I’d guess that the Apollo Guidance Computer (AGC) in the film was designed well before that — maybe 1964 or even earlier.

I’m a little confused. The Wikipedia description of the AGC states that it exclusively used Fairchild resistor-transistor logic (RTL) dual NOR gates in a flat-pack. Hmmmm. That’s not what the film shows.

In any case, both the single logic gate in a can and the dual RTL NOR gates in a flat pack would have been obsolete by 1969. I would have thought that NASA projects would have used the latest technologies, not 5 year old technologies. I guess that subsystems within large projects such as Apollo acquire momentum, and once they’ve been proven, the “If it ain’t broke, don’t fix it” motto applies.

It’s an interesting film, regardless.

This is an amazing video.

Elon Musk’s SpaceX has been working on a system that will return the launch missile intact to its launch pad, ready for the next launch. This video clip was taken two days ago at their Texas launch facility. They moved the rocket horizontally 100 meters, hovered, and tilted it 30 degrees from vertical.

This is a step toward the goal of using Grasshopper to boost succeeding stages to a high altitude before it returns to its launch pad.

SpaceX CEO Elon Musk’s reasoning: This booster, while “cheap”, costs 50 to 60 million dollars. The fuel costs about two hundred thousand dollars. If we can re-use the booster a thousand times and amortize its capital cost over a thousand launches, the cost per launch will be low.

This is a triumph of servo system design and high-pressure high-flow rate fluid control. The trick is to make the rocket’s engine respond quickly while keeping the servo loop stable. I imagine that the signals from many sensors of all types are monitored by the guidance computer. The resultant control of thrust is impressive. 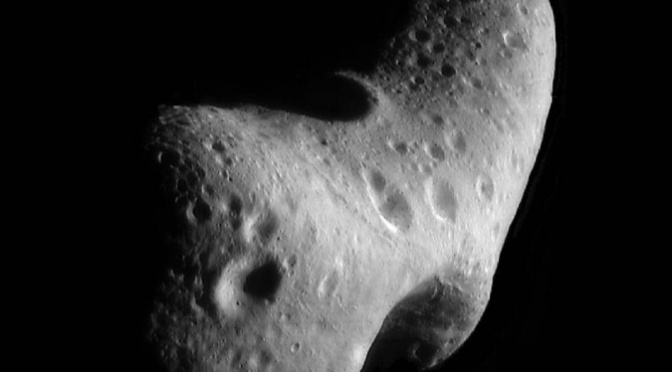 Yes, there IS a foundation that’s concerned about the possibility of an asteroid striking the Earth.

Their motto is “Detect. Deflect. Defend.” This announcement appears on its website, b612foundation.org:

The B612 Foundation is a nonprofit 501(c) 3 organization dedicated to opening up the frontier of space exploration and protecting humanity from asteroid impacts. On June 28, 2012, the Foundation announced its plans to build and operate the first privately funded, launched, and operated interplanetary mission – an infrared space telescope to be placed in orbit around the Sun to discover, map, and track asteroids whose orbits approach Earth and threaten humanity. 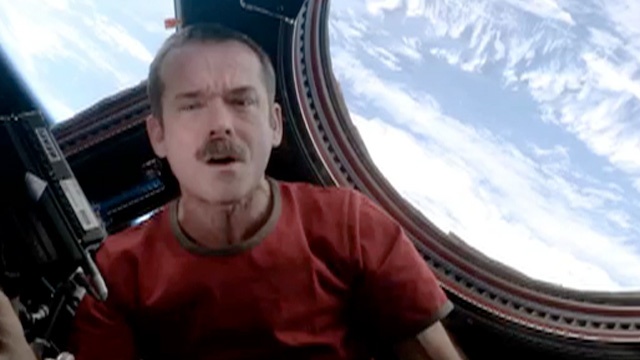 Wow! What a video! Kudos to everyone who helped create this fantastic music video that was just uploaded to YouTube. (And kudos to David Bowie, for allowing this majestic performance of his classic song from, um, 1969.) Until now, David’s performance was definitive. I think that this performance trumps David’s. What do you think?

A revised version of David Bowie’s Space Oddity, recorded by Commander Chris Hadfield on board the International Space Station.

With thanks to Emm Gryner, Joe Corcoran, Andrew Tidby and Evan Hadfield for all their hard work.

Emm Gryner tells the story behind this performance.

This is Canadian Commander Hadfield’s last day aboard ISS after nearly five months in space. He arrived December 21 and took command of the space station on March 13. He’s been an active contributor to social networks while aboard ISS. Tomorrow, he will return to Earth aboard a Russian Soyez TMA-07M. God speed, Chris Hadfield!

His photo of Florida: 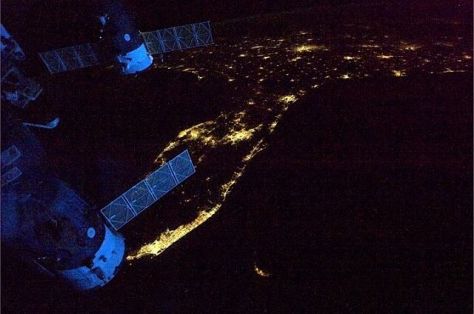 Let’s boldly go. How will we move data across vast distances as we explore space? I briefly essayed this in Extending the Internet off-Earth. I’ve since learned that Internet pioneer Vint Cerf, ever the adventurer, has been collaborating with others on the Interplanetary Internet, which will probably replace IP (Internet Protocol) with Bundle Protocol (BP). It’s a tall order: in space, propagation delay, multipath, and dropout problems will dwarf those found on Earth or near Earth orbit.

This paragraph opened a recent story on ExtremeTech.com:

The United Space Alliance, which manages the computers aboard the International Space Station in association with NASA, has announced that the Windows XP computers aboard the ISS have been switched to Linux. “We migrated key functions from Windows to Linux because we needed an operating system that was stable and reliable.”

Apparently computers aboard the International Space Station (ISS) already run various distributions of Linux. I’m not surprised: once installed, Linux is more stable than Windows and techies enjoy having its source code freely available so that they can modify it to suit the mission. Its biggest problem, in my opinion, is its hundreds of dialects. 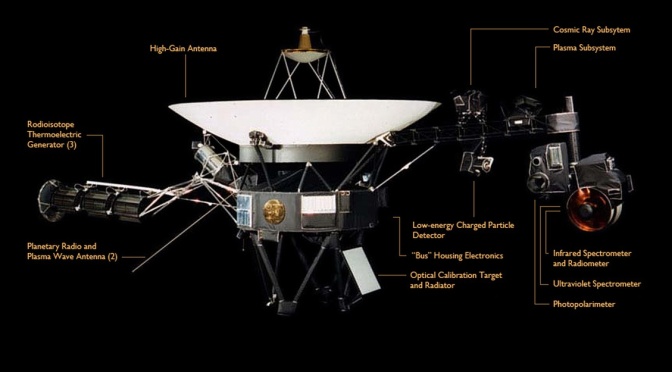 NASA announced that Voyager 1, which weighs about 1500 pounds and was launched in 1977, is apparently at the edge of the solar system and is now entering interstellar space. It’s not likely to collide with any stars: the nearest star is about 4.5 light-years away, and at Voyager’s current velocity (about a million miles a day), it would require 40,000 years to travel that far. (Outer space is huge beyond my imagination.) In any case, it’s not headed in that direction.

It’s impossible to learn about Voyager 1 and its sister, Voyager 2, without being amazed. It was originally projected to have a lifetime of perhaps 12 years. It’s been almost 35 years since its launch, and it’s still transmitting data back to Earth, 24×7. Its transmitter output power is a puny 20 Watts!

Meanwhile, back on planet Earth, for about 8 hours every day, the huge 70 meter diameter dishes of the Deep Space Network (DSN) listen to the incoming data from Voyager 1 at the slow speed of 160 bps (bits per second). (The old Telex system operated at 110 bps and the first modem that I had operated at 300 bps, c 1978.) These bits now require about 14 hours to travel the 11 billion miles from Voyager 1 to Earth.

Very rarely, commands are transmitted from Earth to Voyager 1.

If any of this captures your interest, you’ll find much more detail in Wikipedia:

Everyone who was or is associated with this project should be proud of this amazing achievement. And just in case either Voyager is ever found in a scrapheap in Alpha Centauri, it can serve as a jukebox to play, among other selections, music by Chuck Berry and Mozart. (What, no Bach?!) 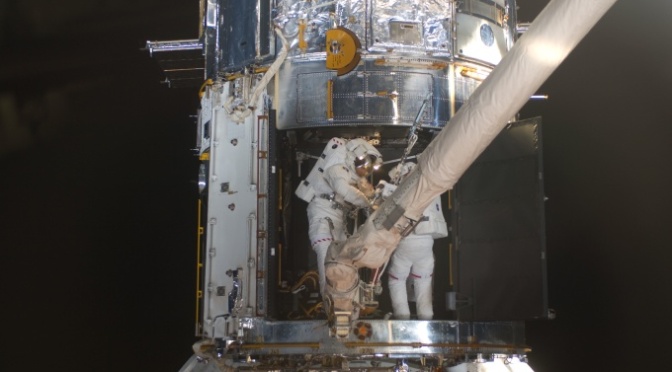 If you’re reading this, you probably are to some degree fascinated with things technical. They’re great . . . until they break. Then somebody’s got to repair them.

Repairing technical systems is always challenging, especially when they’re mission critical, you’re far from home, have few spare parts, and are stressed by a tight schedule. I’ve been under pressure to repair critical systems, but never in the way that the most recent Hubble repair mission members were. It’s a fascinating documentary: 7 crew members trained for 2.5 years for this repair mission. If they failed, the Hubble telescope might never again work.

I was intrigued to see that even in space, repair technicians encounter reluctant fasteners, bolts that simply can’t be removed, and Phillips head screws that strip out while trying to remove them . . . plus while “floating” (at 13,000 miles per hour) in space they have other problems, including torque reaction every time they try to turn a fastener.